1.What is your full name? Your nickname? Do you have any other aliases?

2.Where and when (the campaign date) were you born?

3.Who are/were your parents? (their names, occupations, personalities, etc.)

Dad- Costa Foehammer, Templar of Tempus. Holy warrior of Tempus.
Mum- Mazzy Tielan, merchant. Slain by drow raids in Zylers early years (he was about 8 years at the time)-

4.Do you have any siblings? What are/were they like?

No siblings. Zyler was the only child of Costa and Mazzy.

5.Where did you live previously, and with whom? Describe the place and the person/people.

Zyler grow up in Ashabenford, in Battledale. He lived with his parents until the drow raids started in Dales.
When his mother was slain by a pack of drow raiders, he was put to the Church of Tempus as his father, Costa, was
occupied fully in dealing with the hordes attacking the lands.

6.What was your previous occupation?

Merchant son, helped his mom with the local business.

7.Write a full physical description of yourself. You might want to consider factors such as: height, weight, race, hair and eye colour, style of dress, and any tattoos, scars, or distinguishing marks.

6’ 4” 232 lbs. Zyler is a small giant almost, rarely seen for a human in the dales. A dominant torso with huge arms hanging down over
his strong legs. Short black hair with dark eyes, Zyler has a cold appearance if it wasnt for this blue flashy eyes. Carrying a huge
warhammer by his side and usually dressed in a full plate mail people take note of his precense.

8.To which social class do you belong?

9.Do you have any allergies, diseases or other physical weaknesses?

More proficient with his right hand, but handles himself almost equally well with his left.

12. What words and/or phrases do you use very frequently?

“For Tempus!”
“Be fearless, obey the rules of war.”
“Tempus does not win battles, he helps the deserving warrior win battles.

13. What do you always have in your pockets?

Nothing. But around his neck is a collar from his past away father.

14. Do you have any quirks, strange mannerisms, annoying habits, or other defining characteristics?

Snores heavily, a bad habit of falling asleep in the most unsuitable situations. Has a weakness for ale.
A bit rough and unpolite at times, not very emotional.

15. How would you describe your childhood in general?

Very busy parents, mum spent most the time managing the business and father always on duities for the church.
Had to take care of himself a lot and learned a lot of things the hard way.

16. What is your earliest memory?

First memory from his childhood was the raid when his mum was slain by evil drows just outside Ashabenford.
Everthing before that is void.

17. How much schooling have you had?

Basic school then continued to learn how to read and write through the church of Tempus.

18. Where did you learn most of your skills and other abilities?

Most of his combat abilities he learnt from his father from early years. Then through the church he picked up
his magical abilities and attuned his battle senses.

19. While growing up, did you have any role models? If so, describe them.

Dad was a guiding light after mum passed away. Always looking up to his as a bright shining star.

20. While growing up, how did you get along with the other members of your family?

21. As a child, were you popular? Who were your friends, and what were they like?

Zyler was not very popular as a child. He was tall and strong from early age, but was shy and a bit withdrawn as a child.

22. What do you consider the most important event of your life so far?

Mums passing was a big dent in Zylers life. After that, he slowly became what he is today.

23. Who has had the most influence on you?

Father. From the early years he learnt Zyler everything.

24. What do you consider your greatest achievement?

Taking the Black Spiders life. It was a small revenge on the race that stole his mother from him.
The drow will always be his archnemesis.

25. What is your greatest regret?

26. What is the most evil thing you have ever done?

In his teens, Zyler stumbled and lost his way almost and failed to see the meaning of his life.
His mind was clouded and evil thoughts rained down on him. He did not know how to handle the rage
and frustration, which ultimately led to lots of bar brawls and fights with innocent people getting
beat up for no apparent reason.

27. Do you have a criminal record of any kind?

28. When was the time you were the most frightened?

In the dark times of his childhood growing up, before he found the path to Tempus.

29. If you could change one thing from your past, what would it be, and why?

The past is the past and what matters is the future. I regret nothing from my past.

30. Are you basically optimistic or pessimistic?

Very much optimist. The glass is always half full, not half empty.

31. What is your greatest fear?

Devils and demons. The tales of the Hell of Hells, Baator, plagues Zyler frequently.

32. What are your religious views?

There is only one true god, Tempus, and he leads the way. Always.

33. What are your political views?

Politics is a waste of time. The less the better.

34. How do you feel about killing? Under what circumstances do you find killing to be acceptable or unacceptable?

Life and death is a natural thing. Everything that lives, dies, in battle or not. Honour the rules of war.
Taking a life must be for a reason. Randomly slaying is not the way of Tempus.

35. In your opinion, what is the most evil thing any human being could do?

36. What do you believe makes a successful life?

Staying true to ones beliefs.

37. Do you have any biases or prejudices?

Drows and other creatures of the Underdark are scum and must be slain immediately.

38. Who or what, if anything, would you die for (or otherwise go to extremes for)?

A fair and honest fight. One that would make Tempus proud.

Part 5: Relationships With Others

39. In general, how do you treat others (politely, rudely, by keeping them at a distance, etc.)? Does your treatment of them change depending on how well you know them, and if so, how?

Suspiciously. Only those I know well can get close to me.

40. Who is the most important person in your life, and why?

My father. The only one in my life who I can speak freely with and who understands me.

41. Do you have a spouse or significant other? If so, describe this person.

42. Have you ever been in love? If so, describe what happened.

43. How close are you to your family?

My father is the only family member and is very close to me.

44. Have you started your own family? If so, describe them. If not, do you want to? Why or why not?

45. Who would you turn to if you were in desperate need of help?

Dad, church. In that order.

I trust only myself to protect me.

47. If you died or went missing, who would miss you?

48. Who, or what, is the person or thing you despise the most, and why?

49. Do you tend to argue with people, or avoid conflict?

I rarely argue. I do what I think is right and stick to that.

50. Do you tend to take on leadership roles in social situations?

I am my own leader. I think that one can lead itself for whatever cause one has.

51. Do you like interacting with large groups of people? Why or why not?

Spreading the knowledge and wisdom of Tempus is a duty, but I prefer to stay close to fewer people.

52. Do you care what others think of you?

Depends on who it is, and in what situation. But generally, yes, when it comes to close friends. 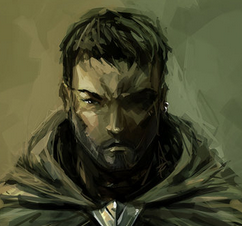