Note Bob, who plays Ken Lee, Male High Elf Wizard (Folk Hero) Level 7 is away on business again, I used to remember him when he would speak to rough commoners like me and the rest of the Union. Simon (who plays Zalt and his menagerie) therefore botted the Wizard again.

The guys are in an ancient Dwarven ruin (Bronzehammer, wouldn’t you know it), in the lower slopes of the Forlorn Hills, they are with Squire Welch (Sqwelch) who tracked a Gargoyle messenger to this locale, and also spotted the Eye/High Lord Bugbear-guy that the PCs have been hearing about for… oh, ages and ages, like 4eva.

The guys have beat down all the inhabitants (they have found) within the ruins, discovered a bunch more Coded Notes (which Zalt has translated- see previous), found a cache of Bronzehammer arms and armour, and discovered a dead Elf… which turns out be ‘Devek’, Goren’s brother. 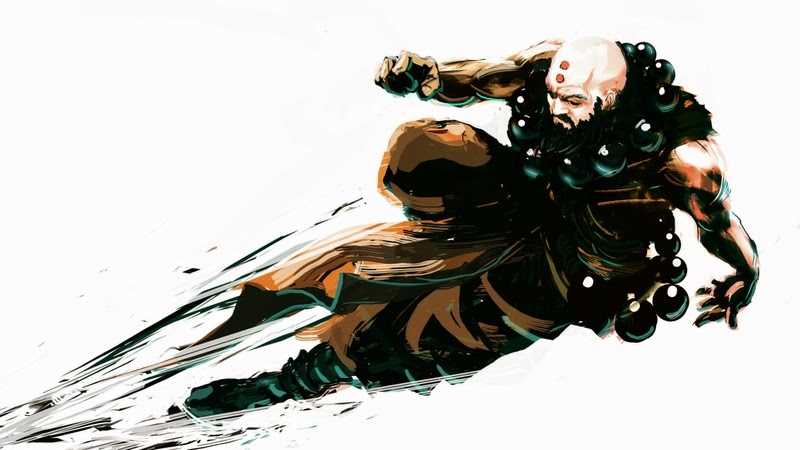 The Union then camped the night in the ruins, interrogated Devek with a Speak with the Dead spell (see last session) and then bumped into a bunch more bad guys- Gargoyles and crazy Flying Monks. The Union, of course, managed to win through but several of their enemies escaped. 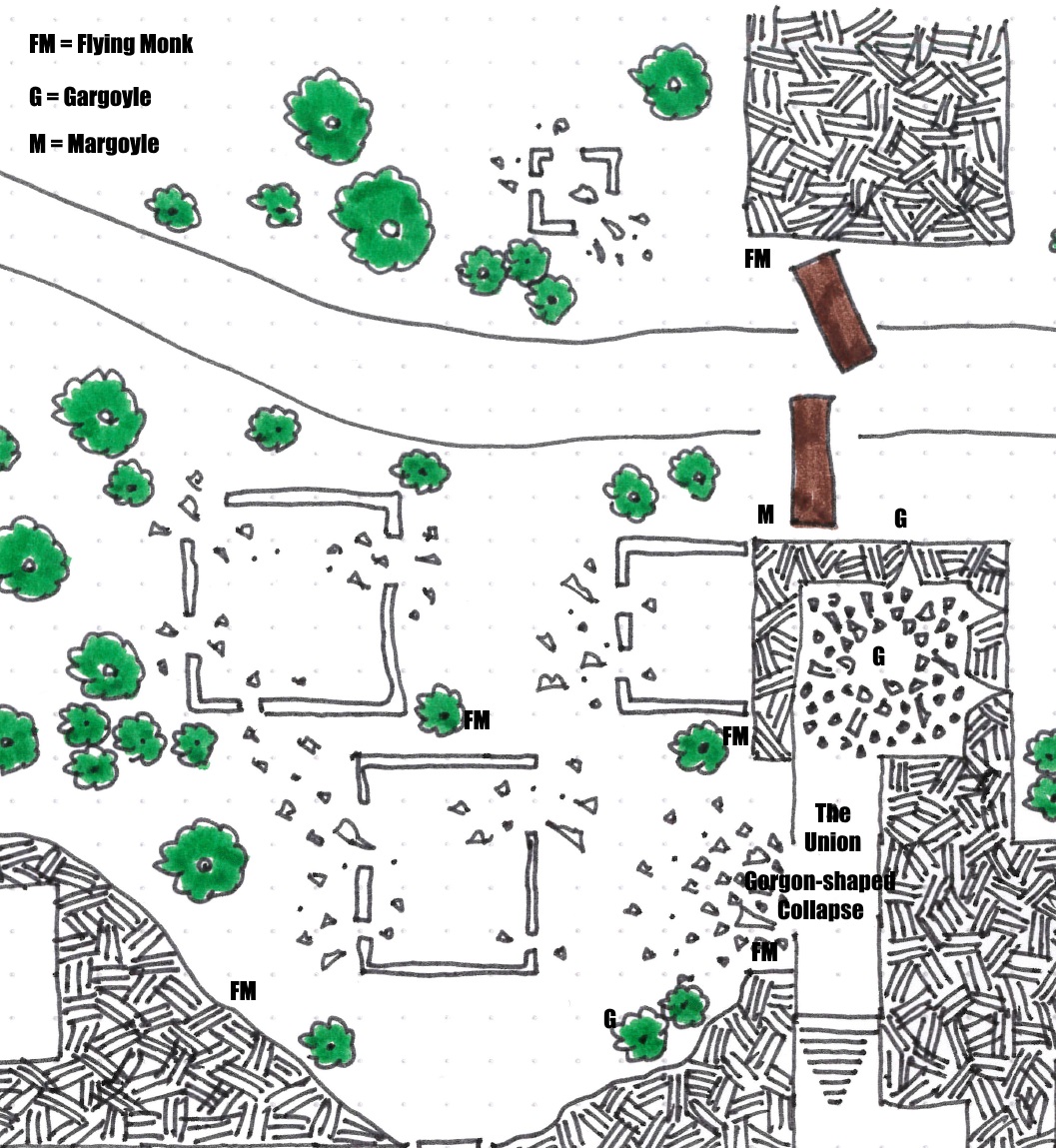 I don’t know why I bother writing this anymore- Grimm takes at least one beating every session.

And so, after the fracas, the guy’s police up the area- collecting ammunition and making sure that the bad guys, and in particular the chop-socky crazy flying Monks, have fled the battle field. Zyler, still flying enabled, goes for a high-altitude nose around and spots… fire, or at least smoke, coming from the tree line a little further back down the trail- the spot where they left Sqwelch (the Lizardman Ranger) guarding the Union’s mounts. That’s not good.

The Priest of Tempus warns the other guys, and then administers a little light healing to Grimm, who as always has taken a beating (Zoki, who plays Grimm, has changed his character’s name on screen in Fantasy Grounds to ‘Punching Bag’, such is his chagrin).

Five minutes later the Union head out- back to the tree-line, back to Sqwelch and their mounts, only… there are a mess of tracks in the woods, and only two of the mounts are present- tied to a tree, although both horses have made numerous attempts to break their reigns. Clearly something bad has happened here- something to spook the mounts. Which still leaves two mounts missing (note Grimm’s magical Warhorse- Atlas, is not summoned atm), a short while later Lord T’s horse is found, terrified and wounded- lost in the woods; the creature has been slashed terribly across its flank- the guys check out the wound and are soon convinced that it was inflicted by some large clawed beast. ‘Pepper’, Lord T’s horse, is calmed and then healed. The guys press on- deeper into the woods, following the churned-up snow, eventually into a clearing in which they discover the last of the missing mounts- Zalt’s horse, the poor animal has been burnt, or else… bathed in acid, as has a nearby tree which is also steaming and smoking, there are also a lot of confusing tracks here.

The Union examine the crime scene, eventually they arrive in slow stages at the following conclusion; the horses (and Sqwelch) fled from and then were attacked by a large flying creature- both Sqwelch’s tracks, and the tracks of the flying creature, suddenly end. Consensus is Sqwelch has been taken, best bet (after an extended chat) is by a Black Dragon- there were sightings of such a creature flying over Bargewright during the Ironwrought competition. Investigations over the guys grab their horses and lead them back to the Bronzehammer ruins, Wodger is ordered to make a compound from one of the ruined buildings, to corral the mounts, Zalt directs his stone servitor while the rest of the Union get in another Short Rest.

Then a brief chat and back into the ruins proper- the guys are now convinced that the High/Eye Lord and the Hobgoblins that Sqwelch spotted here earlier are very likely gone, they have been on site for nearly a day now, and there’s been no sign of the bad guys. Which inevitably leads to questions about why they were here?

Time to find out… there are two doors that the Union have yet to investigate, cautiously Lord T leads the guys back in to the ancient Bronzehammer complex, and to the nearest of the pair- the Rogue checks the way and then creeps into a recently abandoned forge. The key word in the last sentence is ‘recently’ the forge is still lit, the room is still warm- it seems the guys have their answer, or at least the start of it- the High/Eye Lord came here, perhaps, to use the forge- but what for?

The Union are investigating the situation (cautiously at first) when roaring from the furnace comes a large Fire Elemental, the creature engulfs Zalt and sets the Warlock on fire, there’s a moment of panic- followed by a few more scorches and burns, and then Zalt Banishes his fiery attacker. 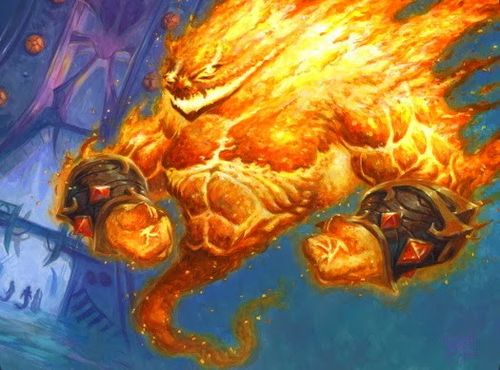 The guys are shook up, although already readying themselves for the spell’s end and the elemental’s inevitable return- the Banishment spell buys them a minute’s grace. Grimm gets creative, the Paladin finds a massive pair of bellows (massive- as in as big as him), and then fills the device up with water from the quenching bath- he fills it right up, Lord T meanwhile swigs a Potion of Fire Resistance and readies his blades, Zyler already possess the same talent courtesy of his magical armour.

A minute later the roaring Fire Elemental is back, and a second later is roaring not in anger but in terror as Grimm leaps on the bellows and shoots gallons of water straight into the heart of the conflagration, the guys go to work- and in under ten seconds manage to destroy the beast.

Left in its place is a small black rock, it looks to be a lump of slightly warm coal- the stone has symbols on it, although none of the guys can read them. Ken Lee and Zalt are certain that the stone was used to summon the Elemental, which no doubt helped in the forging- or for whatever purpose the forge had been used.

It didn’t much feel like a Trivial encounter at the start, the Fire Elemental set two of the guys on fire and burnt another pair badly as it launched itself from the Forge. The guys were flailing for a while.

The Union search the chamber- thoroughly, they discover an ancient treasure chest hidden in one of the massive coal bins, the box contains money and yet another Potion of Fire Resistance (with LT takes to replace the one he used), the chest however is old treasure, nothing to do with recent events in the forge, it seems.

Eventually Zyler discovers shards of some sort of mold, it seems a gold-coloured metal has been poured in to the container recently- in the last 2-5 days perhaps, furthermore there is evidence that more delicate work (etching and the like) has been done on whatever was turned out of the mold. Last bit, this after the laborious process of finding bits of the shattered mold that fit together (like a 3D jigsaw), the guys are convinced that the thing produced in the forge was a bell- most likely made from Bronze… a bronze bell, and in the Bronzehammer ruins. A mile of speculation follows, Zalt is convinced (maybe) that the bell could be part of some ritual, perhaps to summon someone or else something.

Obviously it is important.

I just want to take a moment here, as a DM, speaking to his players-

Q1. Do you know how many bells you have found secreted in the various treasure caches scattered throughout this adventure so far?

A1. The answer is… 57. I know this because I put them there- you even discovered a sack containing 50 bells all in the same place.

A2. All of them were found inside Bronzehammer ruins (various locations).

Q3. What did you do with these bells?

Q4. Who did you sell the bells to?

A4. You sold some of them to Jarett (the Womford fence), but the vast majority you sold to the merchants at Bargewright. Obviously, these merchants have departed now, last seen heading off back to Triboar.

Back to the here and now.

6) Summary the back to Womford.

The Union do a lot more head scratching, and then complete one final sweep of the Bronzehammer complex, again visiting the collapsed passages – the guys are certain that many creatures (most likely Hobgoblins) came out of the depths here and then soon after collapsed the tunnels behind them. They then, probably, met up with the High/Eye Lord- made a bell (for some reason) and killed Devek (Goren’s brother), and then… departed- towards the Iron Road.

Things are going on, and the guys don’t know who the bad guys are (beyond their names and descriptions), or what purpose they serve- that must be frustrating. Zalt sums things up with a little speech-

“There are bunch of factions in the Valley- cultists, humanoids, Tiamat worshippers; they are all trying to achieve some terrible (but unknown) end. We are stuck in the middle watching it all happen- and mostly chasing shadows.”

“I think there are two big bad guys- the High/Eye Lord (the Bugbear on the Manticore), and the Lord of War (the Elf with the Devilish friends, spotted briefly when Rowan was rescued), there are also a bunch of Tiamat worshippers, some masked cultists and a bunch of pale skinned (and tough) humanoids. There’s also something going on regarding the Bronzehammer Dwarves (and their ruins) and perhaps even the Vraath.”

Head scratching done the guys are keen to get back to Womford, the weather however is setting in- more snow, and yet a bit of wet cannot hold back the Union, and so after an uncomfortable ride (with Zalt having to double up with Grimm, on the newly summoned Atlas), and another night out in the dark and the cold, the guys make it back to the town- it’s the 10th of Hammer.

The bad weather is quite definitely spreading, and getting worse, Womford however is picturesque, made again clean and quaint by the encompassing white blanket of snow. The Union arrive exhausted, and ready to be off the road and in to the pub… however there are children on the street, snowball fights and snow man building going on, all it seems is well with the world.

The Union’s first port of call is a meeting with Captain Soranna, who has a different story to tell, it seems there have been reports in the wilds from the farmsteads nearby- sightings of humanoids along the Iron Road, more specifically goblinoids- the bad guys are on the more, or else… things are stirring.

But that however is the end of the session, plagued at times by bad connection, real life intrusions (for a number of the players), and more than a little DM frustration… it will be better next time. We didn’t get much done.