Yet another good session, particularly as it’s a wonder it even took place. Simply put my PC stopped working two hours before the game, and for an hour afterwards I struggled to make it do anything- and without the PC and Fantasy Grounds we’re doomed. I therefore e-mailed the guys and cancelled the session.

Thirty minutes later, for laughs, I turned the PC on again- it booted up first time, it was like I had just imagined the last hour-and-a-half. One scrambled e-mail later and the game was back on.

That said Christer, who plays the Cleric of Tempus- Zyler, had already e-mailed in sick; also Pedja, who plays the Rogue- Goren had to finish early, he had a 4.30 AM start and we usually play till 11.30 PM- that wasn’t going to work.

So, we didn’t get much done, but we had fun and smiled at the fact that we were even playing.

Last session the guys took down the Necromancer in Lance Rock caverns, and his undead creations including a Zombiefied Beholder- if you’ve not read the last session then you oughta.

The guys had a chat with Necromancer and quickly determined that the fellow is a mad man- although worryingly he keeps on screaming about something called the ‘great eye’, which proves to be a little unnerving when combined with the presence of the reanimated Beholder. Eventually the guys grow bored and frustrated with the psycho Necromancer’s ravings- they kill him.

In the meantime the guys have also discovered a strange piece of modern art- created by the Necromancer, a sculpture (of sorts)- half-a-dozen severed and then preserved humanoid hands and arms arranged to hold aloft, or else frame, the image of a floating eye.

Warning, this image is terrifying- ensure children and pets are away from the screen before scrolling down any further… you have been warned, prepare to make your Sanity check. 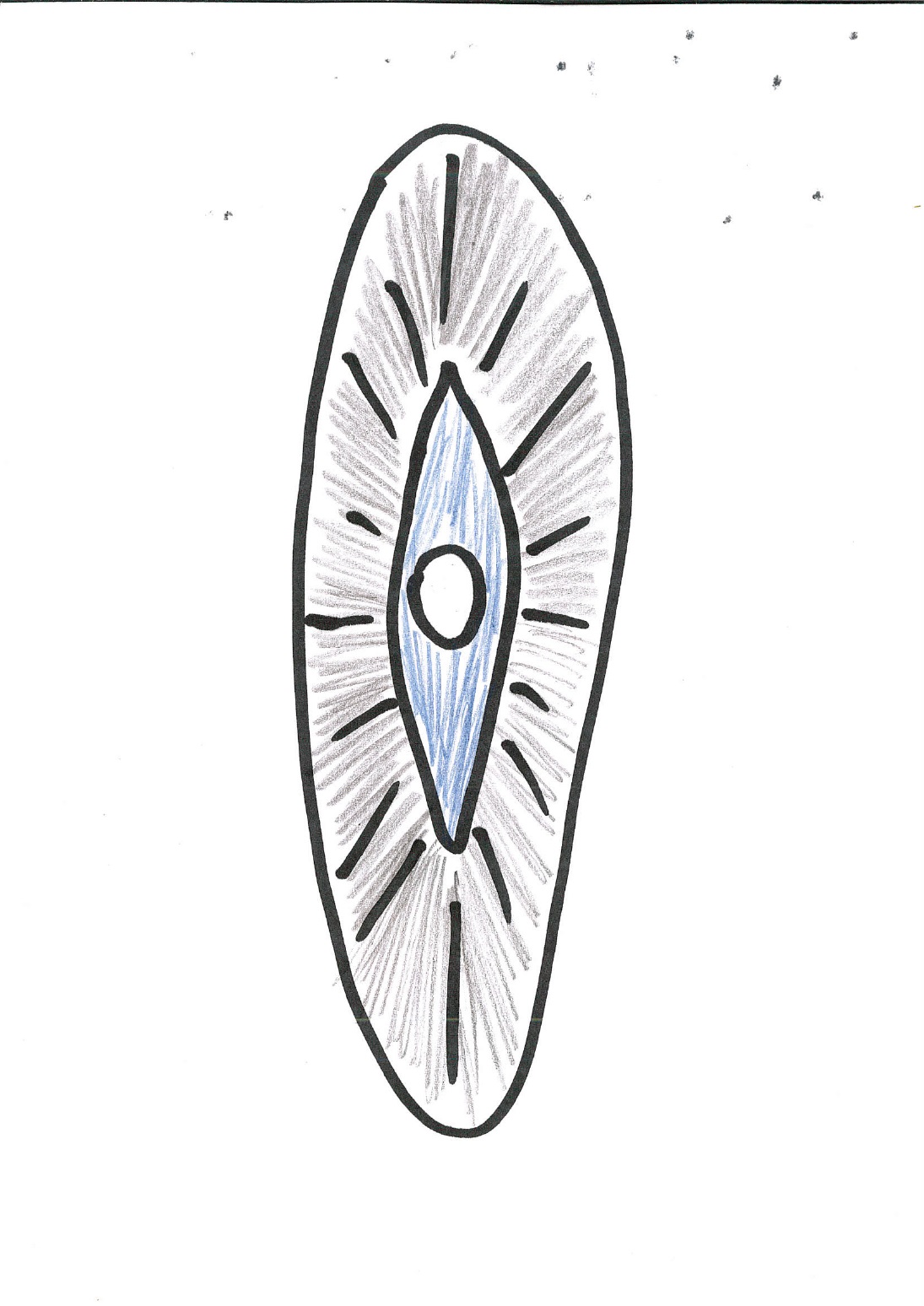 This image still makes me shiver- I’m having nightmares.

And that’s pretty much where we left things, and so…

The brains trust- Zalt and Ken Lee, do what they can to make sense of the strange eye image; the result of their investigations is the discovery that the image itself is an illusion of sort- cast upon a magic item, a small blue orb which defies gravity- it hovers in the air. A little while later (about an hour, actually) the pair discover the item is a Driftglobe, at which point Grimm starts to get interested.

A short while latter the Paladin has snaffled the globe- now he can see in the dark, Goren points out that now everyone else in the dark can see Grimm, and by extension the rest of the adventurers, when he uses it. The Paladin is unmoved- he wants his enemies to see him, he mutters with a snarl.

The guys get in a Short Rest, and then spend another hour or so searching through the entirety of the Necromancer’s caverns- they discover a little more treasure including the foul fellows Spellbook. Grimm orders that the evil tome be destroyed, Ken Lee agrees wholeheartedly with the Paladin, and states he will see it done- right after he’s finished copying all the cool new spells out of it.

The other caverns in the complex are also mostly empty- there’s nothing else interesting to be found, the guys are a little peeved by this, they wanted more of the same- and more of an explanation, who was this foul fellow and what does he represent?

The decision is made, and it’s getting late- time to head back to Red Larch, if they get off now it’ll be short of midnight when they get back, and so the Union head out of the Necromancer’s caverns, next stop Red Larch… 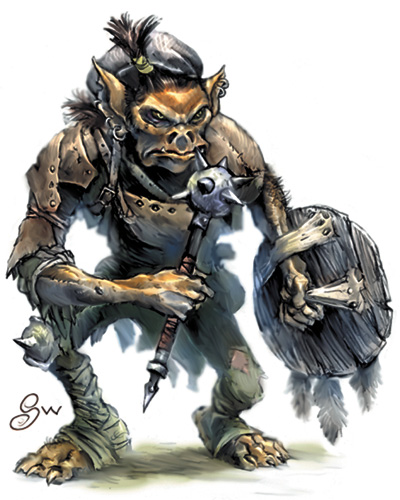 The guys don’t even make it out of the entrance to the cave, they get ambushed by a gang of Goblins, the creatures (including a Boss) have a feisty looking Half-Ogre in tow. The opening salvo from the bad guys is glorious- well, I enjoyed it. Zyler gets hit once or twice (and he’s usually impossible to hit), while Grimm stops a javelin and three arrows (two of them Critical Hits), the Paladin is reduced to 9 hit points from almost full in a matter of seconds. 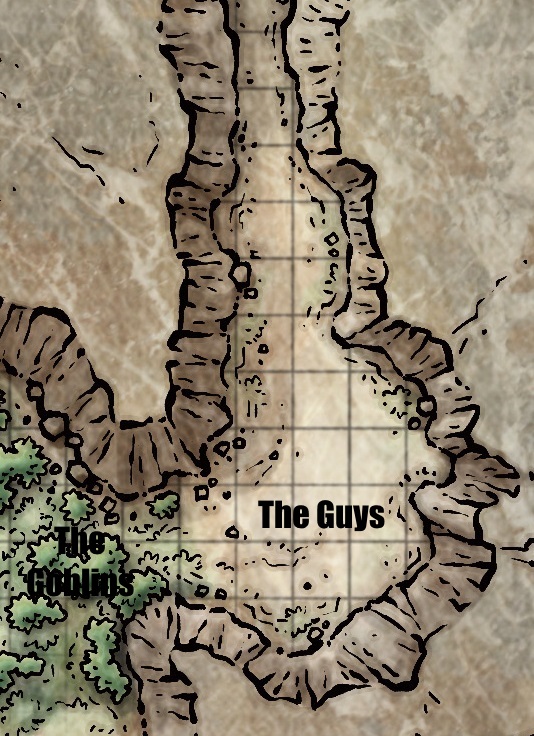 The DMs whoops of joy are short lived. 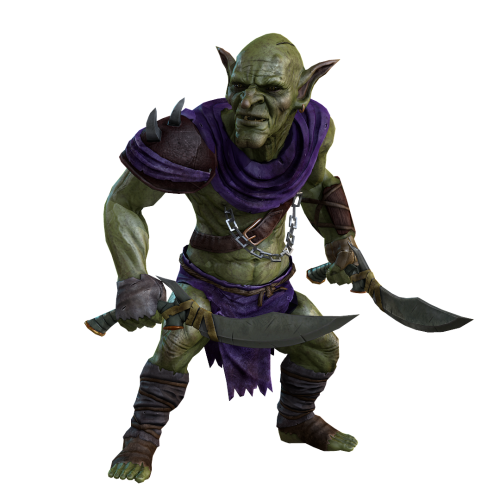 Seconds later the Fireball hits, the Goblins that survive (and the Half-Ogre) run screaming, the guys- obviously in a good mood and happy to have been ambushed, decide to destroy everyone of their attackers. What follows is bloody and unpleasant, although one badly wounded Goblin manages to flee the scene.

The fight is over in seconds.

The encounter, of course, was very easy- it was designed that way, I had this incident planned for quite a while- all I needed for it to work was one (or both) of two of the characters to hit one of the bad guys with their weapons; that’s it. The two characters in question both managed to make their attacks, as I had planned it- in fact the pair made three attacks in total in the short fracas, their rolls were, and in the correct order, ‘1’, ‘1’ and ‘5’- all of them misses, of course.

So, if you’re reading this guys- expect to meet some more Goblins very soon.

You have to laugh.

A search of the fallen Goblins reveals that the leader type is carrying a very fine piece of jewellery, a closer inspection reveals the locket has the stylised “V” for the Vraath family on the rear. The guys are very interested in the Vraath family- having heard lots about the dynasties disappearance from the Dessarin Valley a century or so past. They have also recently found and bested a Vraath tomb, several of the players are now regretting not keeping one of the Goblin’s alive.

The decision is the guys are going to attempt to follow the Goblin’s trail- to find out where they came from; this goes badly at first- five dice rolls and the highest is a ‘5’, and with three ’1’s- the adventurers spend several hours roaming in a big circle. Eventually they get their act together and successfully follow the Goblin’s trail- they figure out a short while later that the Goblin’s were following them- to Lance Rock and then on to the Necromancer’s cavern, and now they’re really regretting not keeping one of them alive.

Why were the Goblin’s following them?

Eventually it gets too dark to continue they’re tracking- this coupled with the fact that save for Goren the guys are not very good at this, and their dice rolls suck.

The guys hunker down at Lance Rock and spend a night out in the wilds. 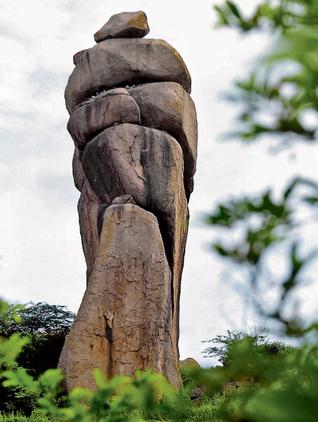 The night passes without incident.

The next day the guys are on the Goblin trail again- the creatures take a circuitous route- back to Red Larch and then around about the outer reaches of the town, always keeping their distance from the place. It seems the Goblins have had their eye on the adventurers for a while, or else they were simply waiting to spot a likely looking group exiting the town.

They really should have kept one of the Goblins alive.

Eventually the decision is made to try and continue their tracking- although time is getting short now, it’s the 20th of Nightal and Grimm and Zyler are on stage at midnight tonight, in Allfaith’s Church in Red Larch, it’s the Winter Solstice- Grimm is reading the prayer, and Zyler is giving the sermon. In truth both guys are loathe to be doing either- but I’m a nasty man, what can you do?

At last the guys (actually Goren, with a little help from Ken Lee) get a bead on the Goblin’s trail- they follow it all the way back to the Vraath tomb that the guys cleaned out two days ago- within the deserted Vraath ruin are signs that the Goblin’s have been searching.

Best guess is the guys gazumped the Goblins, maybe the gang had ear-marked the tomb for investigation… none of the adventurers know for sure.

Mystery over- maybe, the guys head back to town.

Red Larch, as always, welcomes the adventurers, Kayleesa- owner of the Swinging Sword Inn delights in the guy’s (tempered) tales- their routing of the Necromancer and the undead, Kayleesa was certain that there was something ‘off’ about Lance Rock. The guys miss out part of their story- they don’t mention anything about the ‘great eye’ or the Zombie Beholder, they don’t want to panic the natives.

The Inn owner rewards the guys for their efforts, the gang relax a while- they’re exhausted (no really, all of them except Zalt are Exhausted, the condition), although Ken Lee finds a moment to spend some quiet time with his favourite waitress at the Swinging Sword- Ghilee. 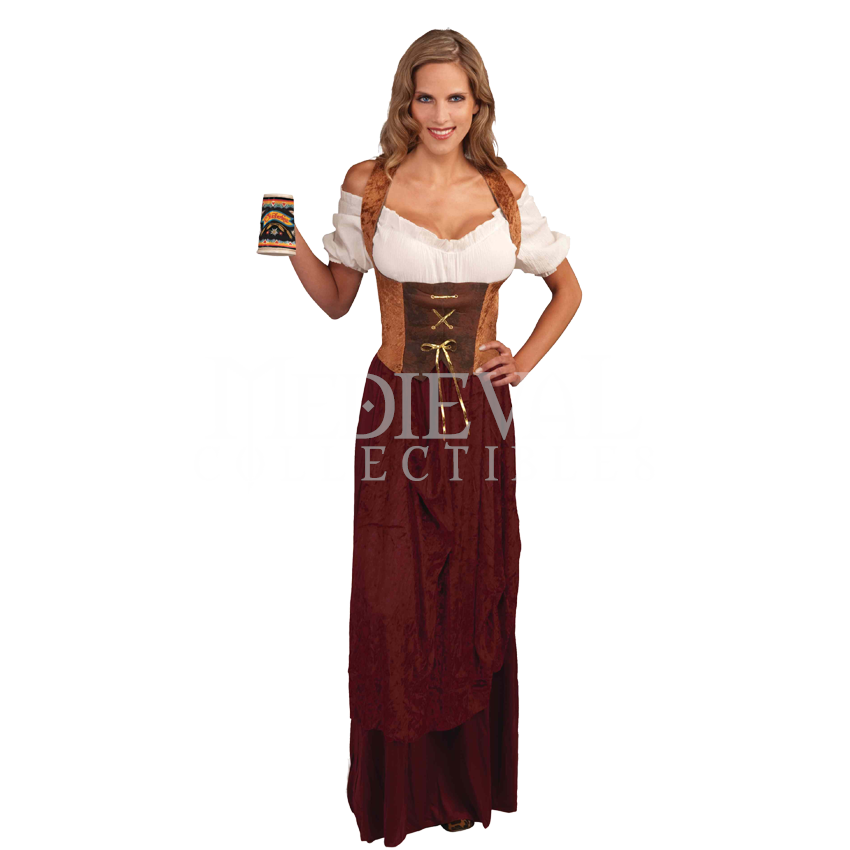 The beautiful waitress it seems gets excited by the Wizard’s stories of adventure- close calls, and the constant battle to stay alive… and so she decides to tell Ken Lee about “Ironwrought”.

“Ironwrought” it seems is a competition, an annual three day event starting on the 28th of Nightal each year, it takes place in Bargewright- a settlement two or so days to the east of Red Larch. It is a dangerous, and therefore, exciting event- all manner of ‘tough’ individuals turn up for the competition, better still the invitation is open to all races- all rivalries are off for the duration of the event, Bargewright is neutral for three days. Each year the events that take place during the “Ironwrought” are different, however they inevitably involve endurance and fighting type competitions. The winner of the event obviously receives monies and prestige, and perhaps the favours of many…

Ken Lee likes the sound of this, and promises to investigate the matter further.

Ghilee makes the Elf Wizard further promise that he will attend this year’s event, and that he will take her with him- Ken Lee is happy to make this promise, after all he is a consummate liar.

And at that point the session comes to an end.

New Info- Lance Rock caverns are investigated- there are no answers there. The guys get jumped by Goblins and then follow the creatures all the way back to the Vraath tomb the adventurers cleared out two days ago- odd, maybe. Back to Red Larch for a reward and stories of “Ironwrought”.