After a week off last week we’re back on it.

All players present and correct.

Larmon, the shepherd, has just been rescued from a pack of Wolves, including a pair of Dire Wolves- the poor fellow is exhausted, but incredibly thankful. The guys heal the his wounds (he was bitten in the fight) and then move onto the chat- Larmon is another victim of the warm weather, earlier he had made the decision to head up the Cairn Road in search of a number of stray cattle, to try to earn himself a little extra money.

As it turns out sunny warm days often bring the predators out, even if it is supposed to be winter. 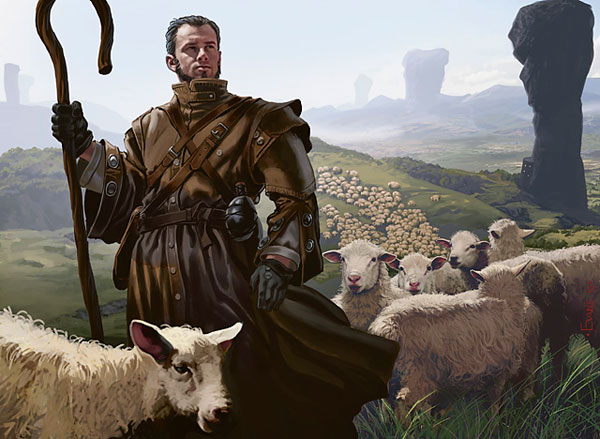 The guys take an hour to chat to the fellow, they are particularly interested in any sightings Larmon has made of flying creatures during his travels, the shepherd has seen nothing of late but recounts a couple of stories, the first about a Giant Owl he saw heading south through the valley (this happened several years ago). The second story is however also second-hand, Larmon remembers speaking to a caravan guard back in the Swinging Sword Tavern in Red Larch, the guard claimed he had seen a Knight- in full armour, riding a flying horse high above the Long Road, to the north of the town- this story dates back even further, perhaps five or more years.

Soon after Larmon departs- still thanking the guys for his rescue, the shepherd heads back to Red Larch in a rush, while the guys head on to Cairn Woods- the natural stopping point of the road from Red Larch to Bargewright & Womford. 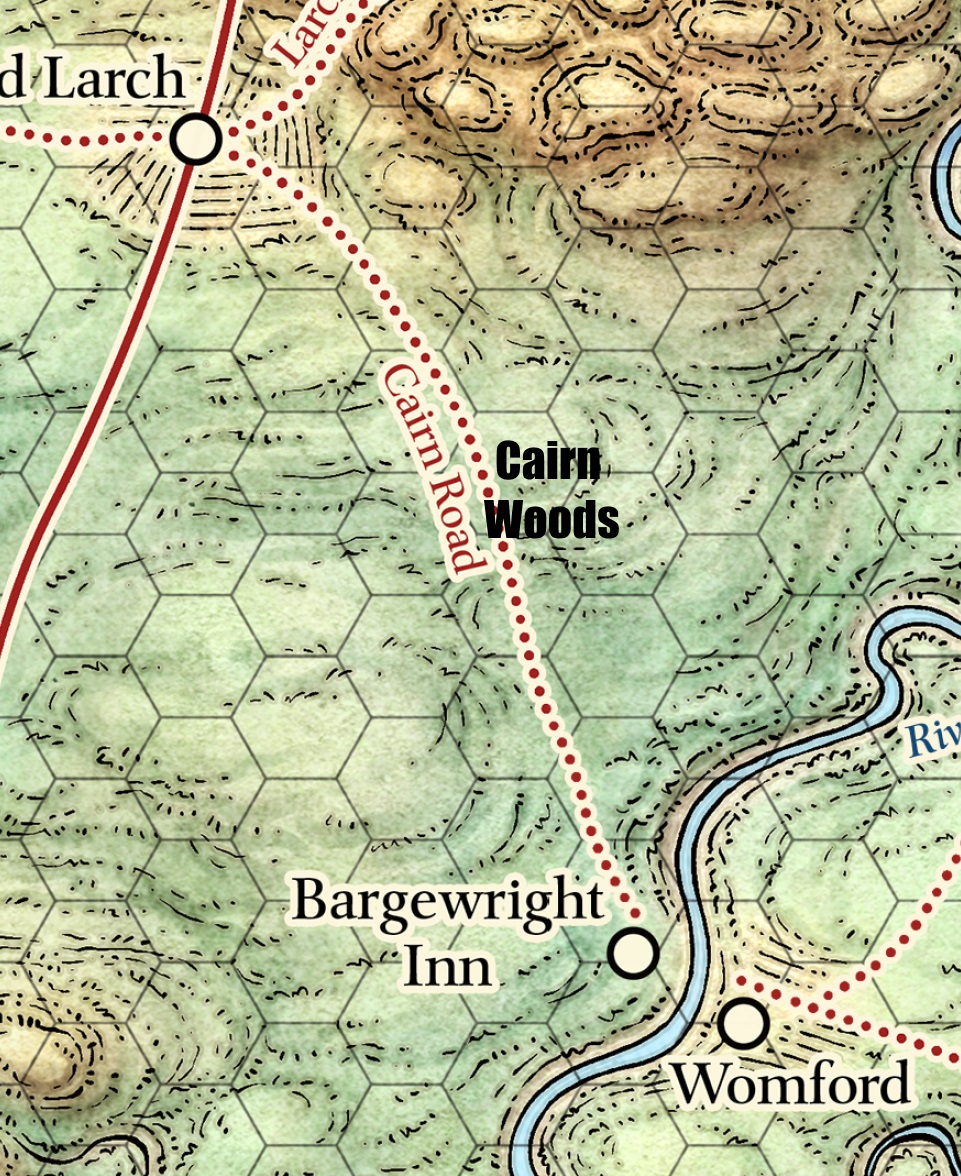 The guys make good time to the Cairn Woods- once there they set up camp and take a well-earned Extended Rest.

2) Camping in the Cairn Woods.

The night passes undisturbed, that is until the very last watch- which is Zyler’s, the Priest of Tempus is disturbed when a Wolf wanders into the adventurer’s campsite. Zyler is quickly into action- waking his colleagues, however the Wolf does not threaten, only every now and then looks back the way it came- deeper into the woods. 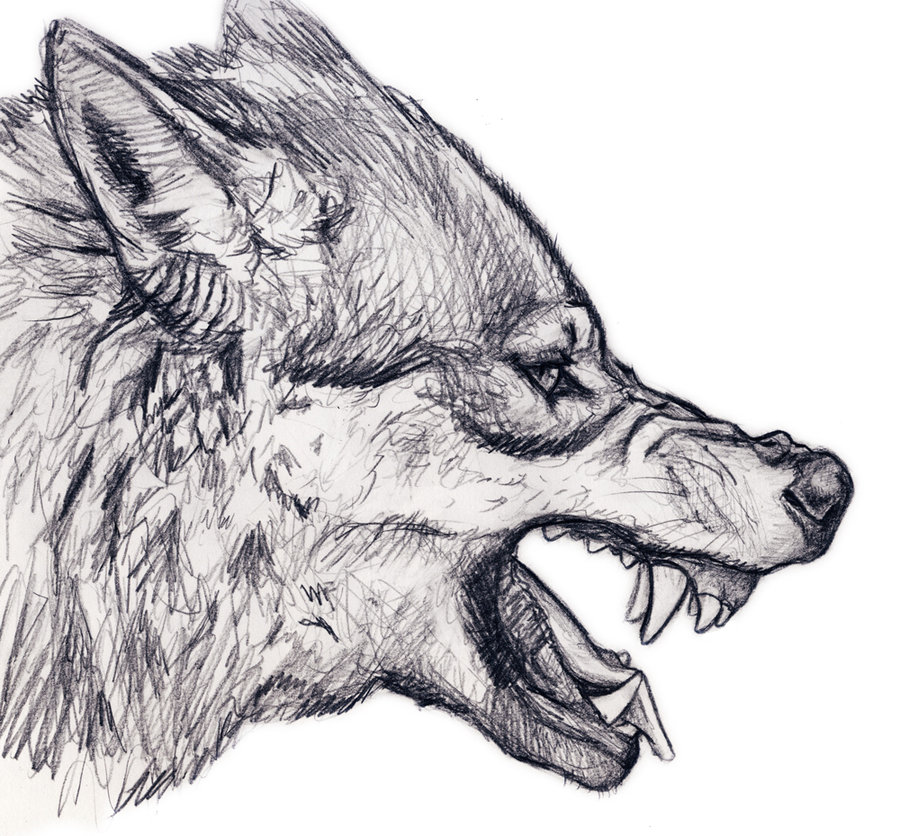 Eventually Zalt communicates with the creature- he possesses a simple form of telepathy, the Wolf answers the Warlock’s message- the beast is about to introduce itself properly when it too is disturbed- “Ogres!” the Wolf tells Zalt with a bark.

Zyler passes this new information on, in a whisper.

Quickly the guys get into action- Zalt conjures an illusion of the Wolf, as the real creature slinks into hiding- it seems the Ogres are in pursuit of the beast. The adventurers are ready… 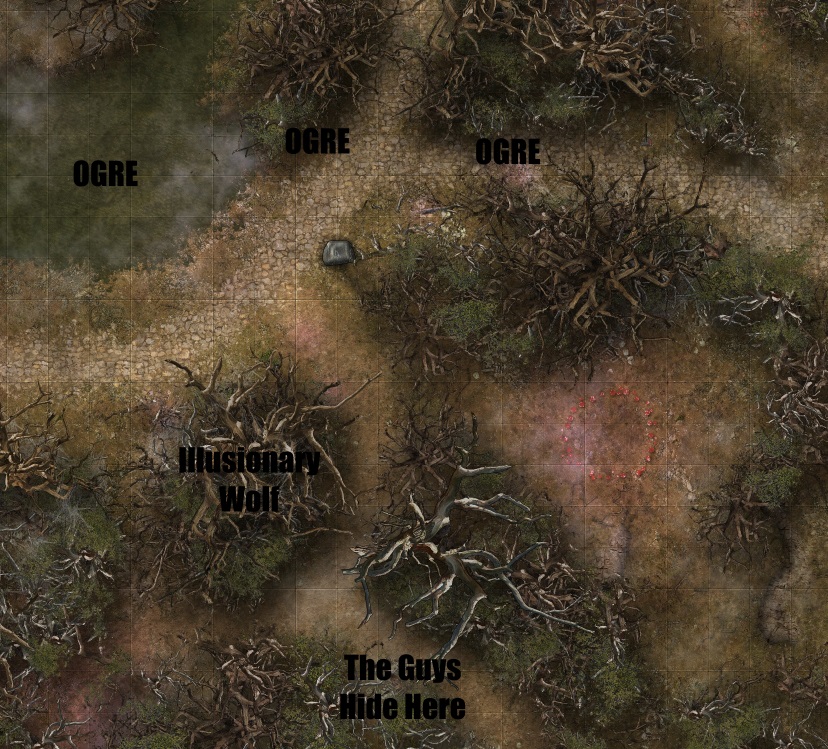 One of the Ogres spots Zalt’s Illusionary Wolf and moves forward at pace- a second later and the Ogre is subject to Ken Lee’s Suggestion spell- the brute is charged with protecting the Wolf. Moments later the creature is involved in an argument with one of its colleagues, who has also spotted the illusory Wolf but is being prevented from approaching it. The argument is regarding the future of the canine- it gets to pushing and rude words, but not too physical. 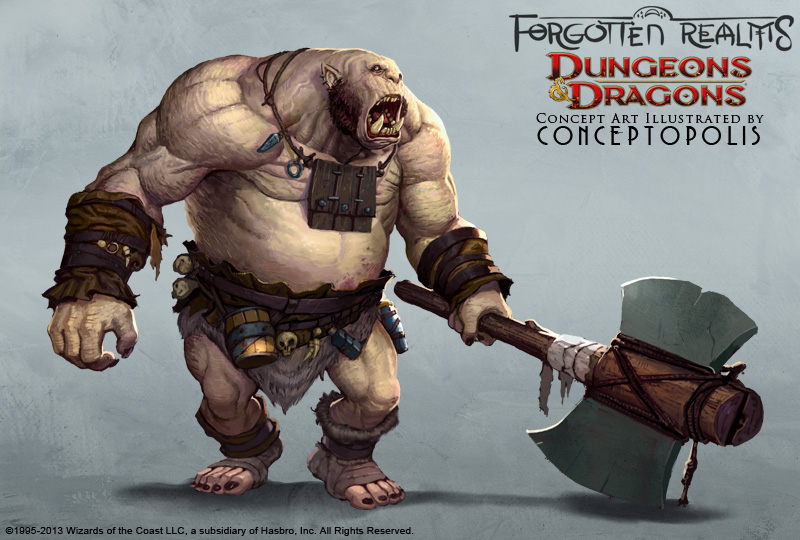 The third Ogre meanwhile spots Grimm- the Paladin’s not great at hiding- the guys launch their attacks, they manage to beat down the first Ogre while the other two continue their argument. At which point Zalt dismisses the illusionary Wolf and hits the two Ogres with a Hypnotic Pattern- both giants are mesmerized by the light show, and left gawping. The poor fellow that is already subject to Ken Lee’s Suggestion spell is addled- it eventually wanders off a little way giggling to itself, on a very enjoyable ‘trip’.

The guys beat down the second Ogre- getting the jump on the mesmerized creature and landing some big hits before it can react.

The third Ogre, now ‘bathing’ in a dirty puddle, suffers a similar fate, although Grimm insists on giving the Ogre its club back before getting into action. Goren brings his own special brand of cruelty to the proceedings, the Rogue wakes the beast from its pleasant day-dream by shooting it (with a Sneak Attack) in the groin- a called shot. In the end Grimm decapitates the brute- a mercy killing.

The Ogres have little in the way of treasure, however the guys are more keen to have a chat with their new found Wolf-friend, at which point Avarthel, the Druid, steps out of the foliage in which he has been hiding (in Wolf form) for the duration of the fight. The Half-Elf has quite a story to tell… 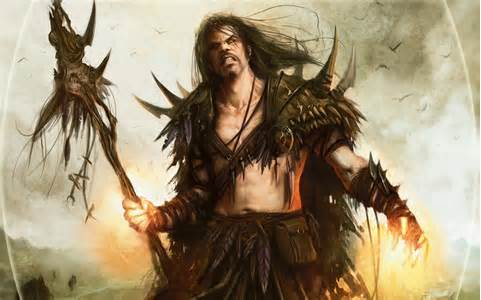 Avarthel introduces himself- he’s a Druid of the Land, he ranges over the southern end of the Dessarin Valley, his master is Jaume- the Druid the guys met earlier at the Rusty Gorgon Inn, in the north of the Valley. Avarthel chats for a while with the guys, however he is itching to tell them his story, in summary-

a) He befriended a tribe of Kobolds many years ago, four months ago the tribe disappeared- their caverns were left empty, abandoned. This in itself is not suspicious.

b) One month ago, by accident, he encountered the tribe again- here in the Cairn Woods, in a ruined structure located deeper into the woods, part of an ancient ruined underground complex. The Kobolds, however, were much changed.

c) Avarthel, ever cautious, decided to watch the Kobolds (mostly in Wild Shape). Oddly the little humanoids seemed to be ordering around an Ogre, a few days later he also observed the visit of a Gargoyle to the complex.

At which point the guys leap into the chatter- they think they are being watched by a group of Gargoyles (maybe).

d) Then a bunch of very militaristic, and pale-skinned, Hobgoblins turned up- this group was lead by a very lordly looking Bugbear. Worse followed- the aforementioned Bugbear seemed to somehow spot Avarthel even in his Wild Shape, and well-hidden within the foliage. The hunt was on- a lightning bolt felled the tree the Druid was hiding behind.

The guys leap in again- they remember fighting some extremely tough ‘pale’ Gnolls, oddly they also met Jaume the Druid at this time.

But back to the story…

e) For five days Avarthel was hunted through the woods- by Kobolds, and Ogres- and with a Gargoyle, at times, flying overhead. Using a combination of skill and luck the Druid evaded his searchers, or so he thought, and so struck out to exit the Woods (in Wolf form), at which point he foolishly bumped into the trio of Ogres the guys have just accounted for.

Avarthel is obviously concerned about the present situation- he fears that something ‘bad’ is afoot. He has no money to offer but he could put together a batch of Healing Potions if the guys would take a moment to check out the situation…

The debate is short- the adventurers are up for the task, although Goren is concerned that they have to get to the Ironwrought competition at Bargewright (one day travel away), for the evening of the 28th of Nightal. Today’s date is the 25th of the month… Goren is out-voted, although the guys are very much of the opinion that Avarthel’s task will not take too long to accomplish- after all it’s just a bunch of Kobolds…

The guys are up for it- Avarthel leads them through the Cairn Woods, to the Kobold’s camp. 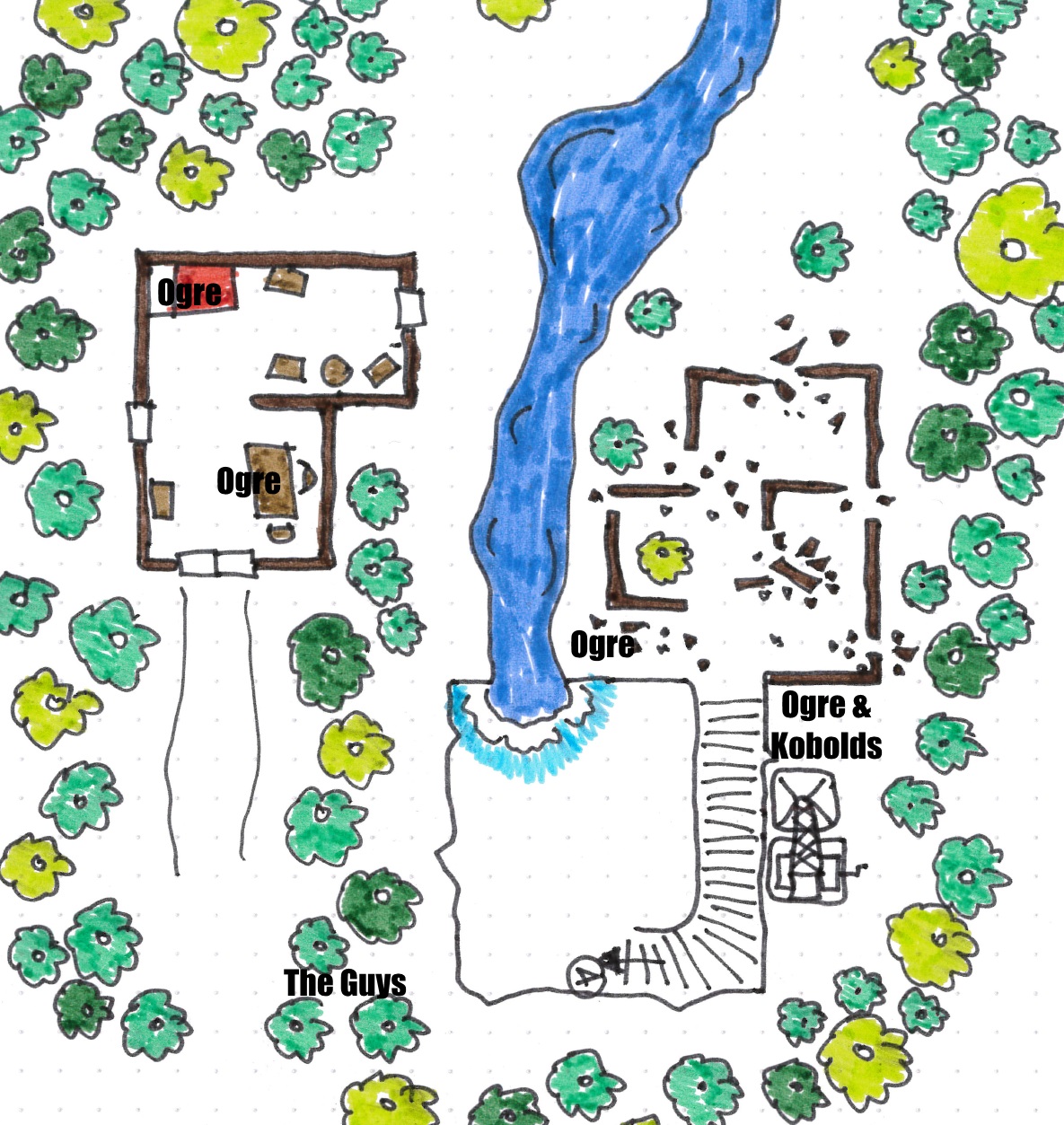 The guys creep in as close as they dare and then observe the place for a short while, there are a clutch of Kobolds bullying an Ogre into various tasks- this group seems to be working on some sort of wooden platform-cum-crane device. A second Ogre seems to be standing guard, idly watching on.

The creatures are standing around a great sinkhole- a small river flows into the gaping pit, while a stone stairway also leads down into it- the guys alas don’t have the angle to see further down the pit. 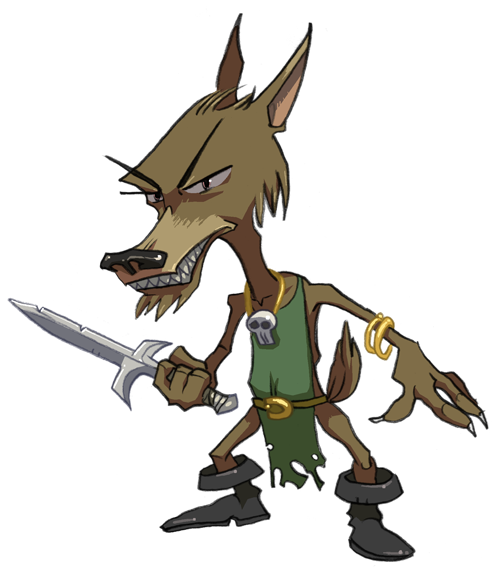 Goren is sent on a scouting mission, his job to check out the barn like building to the north and east of their position, this he does with only one slight scare en route- the building contains two more Ogres. The Rogue evens up the odds a little, he applies the bar to the outside of the main doors into the building; he then sneaks back to tell his friends all that he has seen, and then grabs ‘Rusty’ (the guy’s rusty man-trap) and sneaks back to position it just outside the now barred double doors.

That done, the guys launch their attacks.

Ken Lee hits the cluster of enemies with his Shatter spell, Goren’s bow sings and Zalt unleashes a duo of Eldritch Blasts; while the rough melee types head a little way forward and ready their attacks should anything stray too close.

All five Kobolds fall in a matter of seconds- although one of the Kobolds gets a good way down the stairs in the hole before Ken Lee plugs it with a Magic Missile, the Ogre is critically wounded and flees screaming into the woods (on 1 hit point). 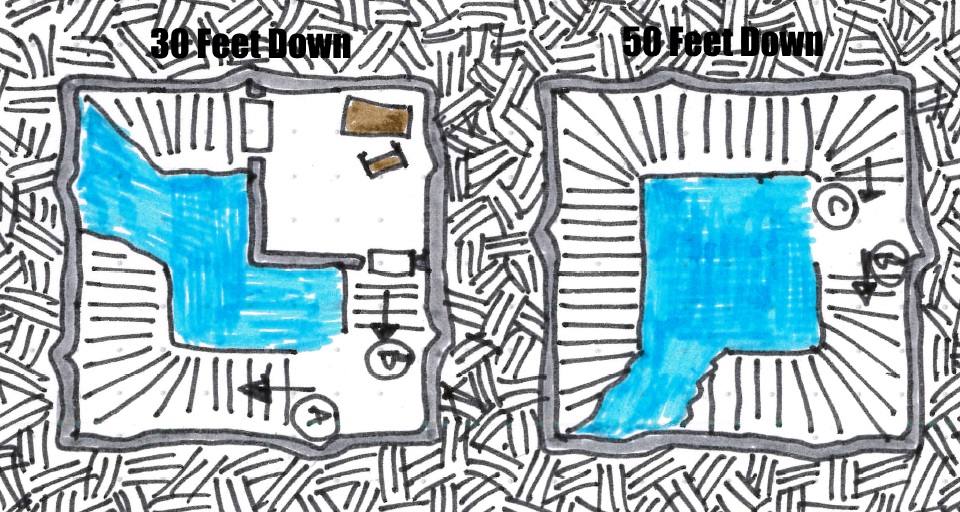 The other Ogre guard, in the meantime, lumbers into action- clubbing at Grimm and Zyler, the pair go to work on the brute, soon after the ranged types (Zyler, Goren and Ken Lee) switch fire and the creature falls.

Just as the door to the barn-like-building is shattered, the third Ogre crashes out and straight in ‘Rusty’ the man-trap (a Critical Hit), it stumbles forward in agony- straight into a hail of missile fire and spells, followed swiftly by a charging Grimm and Zyler.

The fourth Ogre exits the barn-like building only a moment after its colleague, prolonging the fight a little while longer- it too, however, suffers the same fate.

That however is the end of the session.

Ongoing Quests- Quest #1 Get the Pitchblende safely & secretly to Red Larch (COMPLETE), then meet up with Strom Halifax- get it authenticated, sell it and then return home- easy job. Quest #2 Check out the Kobolds for Avarthel.

New Info- The guys chat with Larmon the shepherd they rescued, head on to the Cairn Woods for an overnight and are visited by a Wolf- Avarthel the Druid & a trio of Ogres. Kobolds are acting oddly, the guys agree to check out the situation- to the Kobold lair and beat down more Ogres.