The guys are in the Bronzehammer mines beneath Bargewright, the purpose of their visit to descend the ancient stairs there to Dhol Kuldhir, the Door at the End, and investigate the place. The Bronzehammer Dwarves of Dhol Kuldhir are supposed to be the cause of the infection that effected Kal’Zerth and the Drow a millennia past, and also the cause of the infection that has affected Bargewright (perhaps), which the guys are in the process of curing.

The guys say good bye to Wupert, the Spectator, who will guard the way above for 24 hours- subject to his contract with Kal’Zerth; and then they head down the stairs- cautiously. Or else Lord Thaelond is pushed to the front of the group and sent down first. 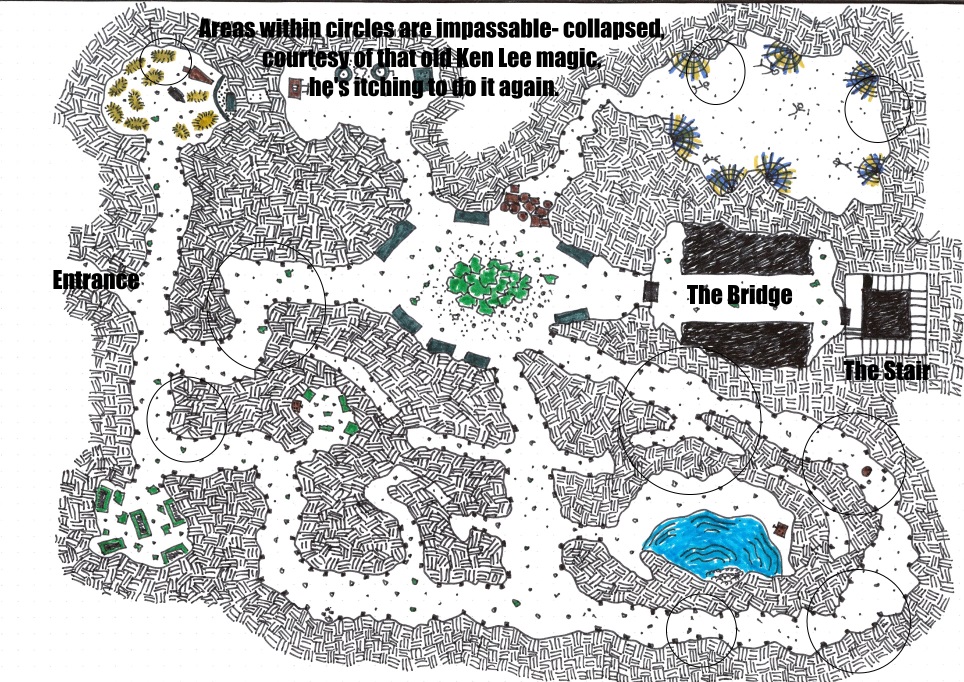 Stairs down are on the right of the map.

The ancient stairs are steep and spiral down into the gloom, although the gloom below has a purple-green glow to it, most odd. Lord T has only gone a little way down when he pulls up to a halt, the Rogue is certain there’s some type of rune carved into the stairs ahead. The ‘Rune Evaluation’ committee convene (Lord T, Zalt & Ken Lee); the trio debate the merits of the way ahead for a short while. The discussion is not helped by the fact that the various skills employed by the three to fathom the rune result in secret rolls of ‘1’, ‘20’ and ‘1’ again. Zalt is convinced what lies ahead is an ancient Dwarven runic trap; the other two members of the committee are much less impressed (but suspicious of the DM- and their unseen dice rolls).

Eventually Zalt takes charge and ushers the rest of the guys off the stairs, the Warlock then hits the rune from above with an Eldritch Blast- and triggers the trap. A massive ball of stone POPS out of the wall by the door, crashes down the stairs and crushes Zalt (for something like 28 damage).

The Indianan Jones style stone continues its journey all the way down the stairs, Zyler dashes out and heals the now very bloodied (and crushed) Zalt.

A little while later, and being very cautious as they go, the guys head down the stairs (leaping the rune engraved section)- all 120 feet down, to an archway into a much larger corridor; this is Dhol Kuldhir, and it is full of fungi, and lit from above by seemingly magical lights.

There’s no sign of the giant stone sphere at the base of the stairs, which upsets Zalt a little.

The guys also quickly discern that the air here is thick with spores from the fungi, which covers almost all surfaces- the decision is quickly made that they will not rest down here, and they’ll also not take too long with their exploring- this is to be a rush job.

Lord T is sent out to take a look around, the Rogue quickly discovers that the door opposite (sorta) is ajar, he sneaks a look within- the chamber beyond is an ancient Dwarven barracks- ripe with more fungi and inhabited by over a dozen Kobolds. The Kobolds however stand motionless, scattered throughout the chamber, these guys seem to be even worse effected than the Kobolds the Union fought in the mines above. Several, if not all, of the little critters have fungi and toadstools growing through, or out, of their flesh. 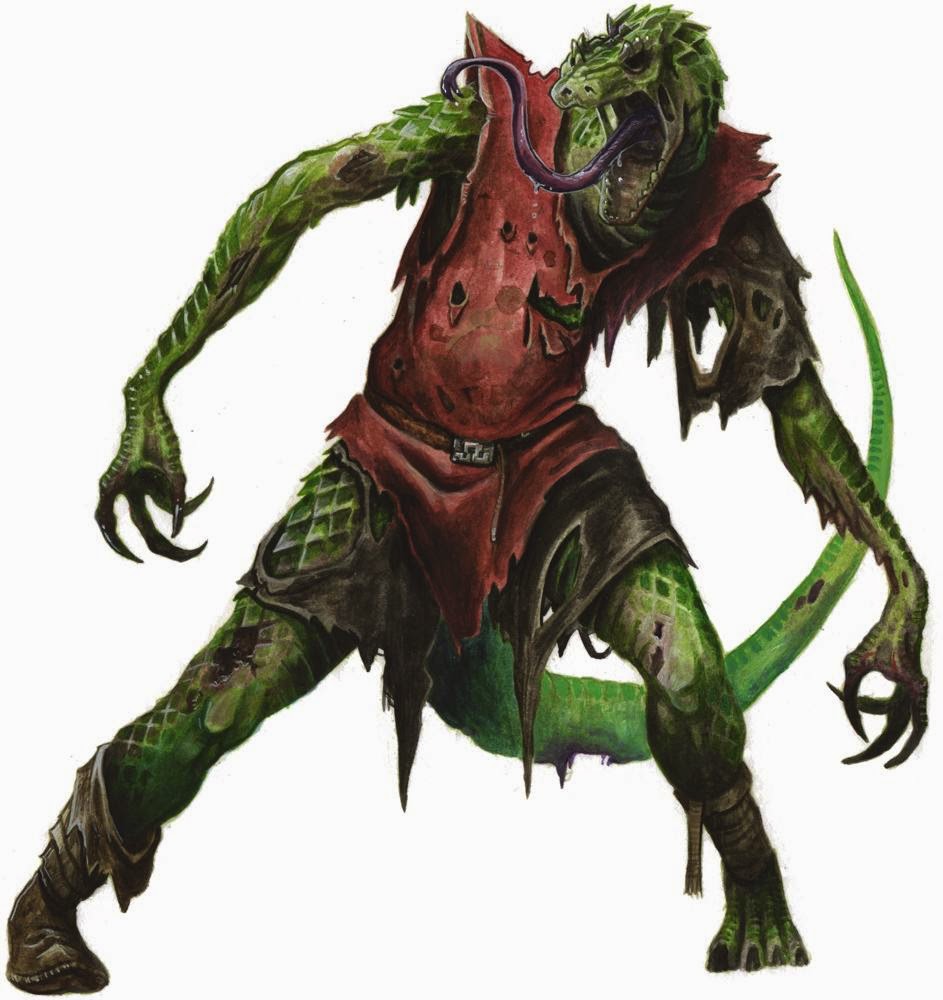 Lord T whispers Ken Lee over, the mage stealthily makes his way- the fiery menace’s eyes light up with glee as he spies within; ten seconds later the Kobolds (and the entire chamber) is lit up- not by glee, but by a Fireball. Only two of the dozen or so Kobolds survive… the rest of the Union chaps rush in to the ancient Barracks and join the dance.

The two Kobold survivors of the blast don’t last long, however Zyler helps the GM along by wrenching the door to a fungi-filled bathroom open, a quartet of Fungi Bats (about 50/50 fungi to bat) flutter out and surround the Priest of War.

A moment later Zalt spots that there’s a door opening back in the main passage, he calls over to the guys- Grimm exits the barracks back into the corridor, just as a different door opens (not the one Zalt spotted earlier). Another fungi-riddled Kobold stumbles out of the newly revealed chamber and dodges past the Paladin of Tymora. Alas in the creature’s wake are a pair of Animated Armours (ancient Dwarven suits of battered plate), the millennia old magical wards attack the Paladin, and land a bunch of hits- punching Grimm in the face repeatedly. 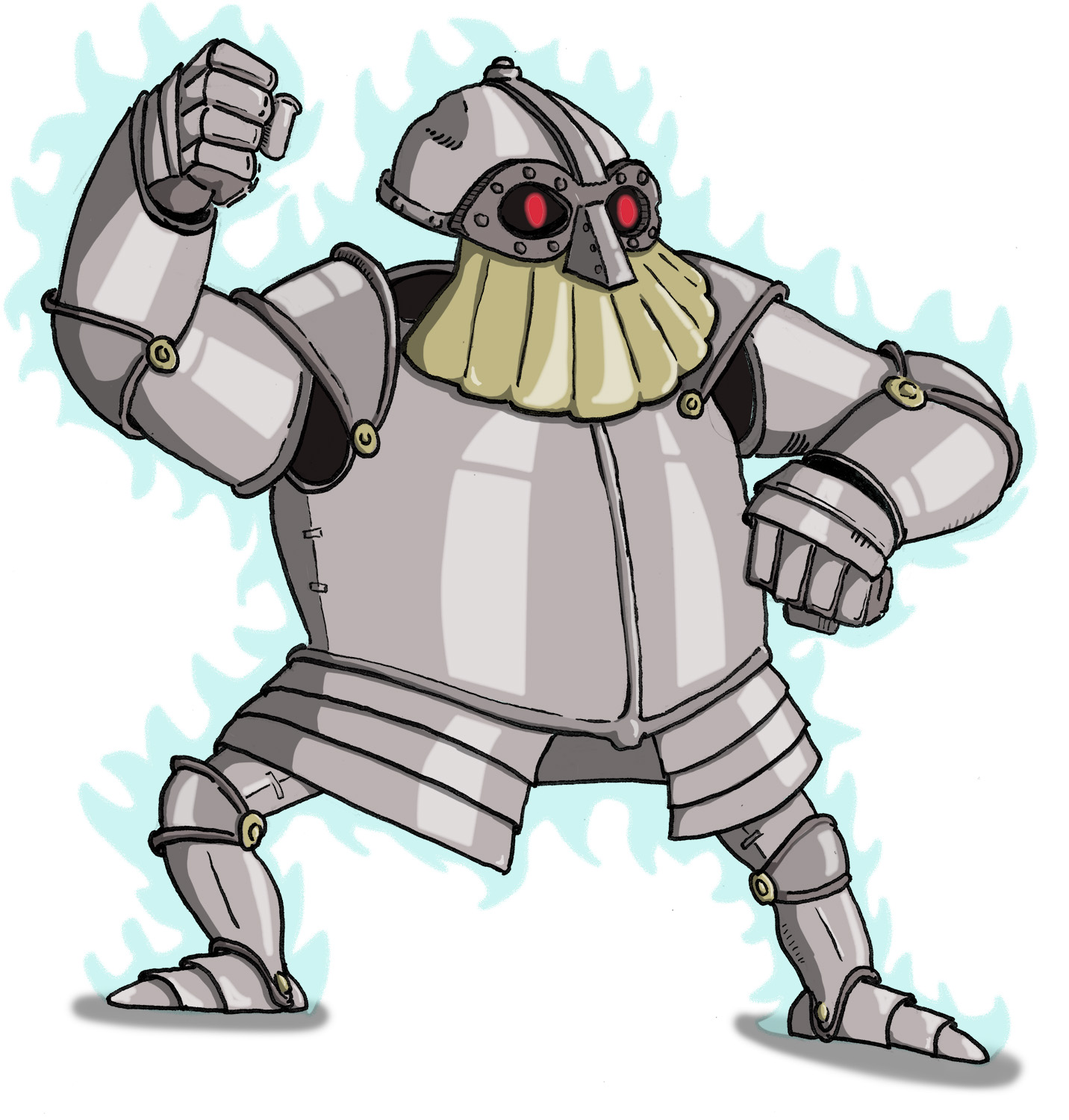 It’s Grimm’s turn to shout for his friends, who come rushing, just in time to see another three Kobolds emerge from yet another chamber to join there companion in the corridor (the one that unleashed the Animated foes); this quartet prove to be considerably tougher, they also have crossbows which they use to good effect. Ten seconds later Grimm is almost on his knees, the Paladin is badly wounded- Zyler comes to the rescue with a bunch of Healing, accompanied (as usual) by a bunch of shouting..

At which point a fungi-plastered Ogre appears from the door that Zalt spotted opening earlier (at last). The Ogre is carrying a Winged Kobold, alas the miserable Urd’s wings are useless, merely fans of paper-thin mould, the creature clambers all over the Ogre- its ride. The Ogre stomps forward and flings a javelin, the Urd fires its crossbow, and Grimm hits the dirt. 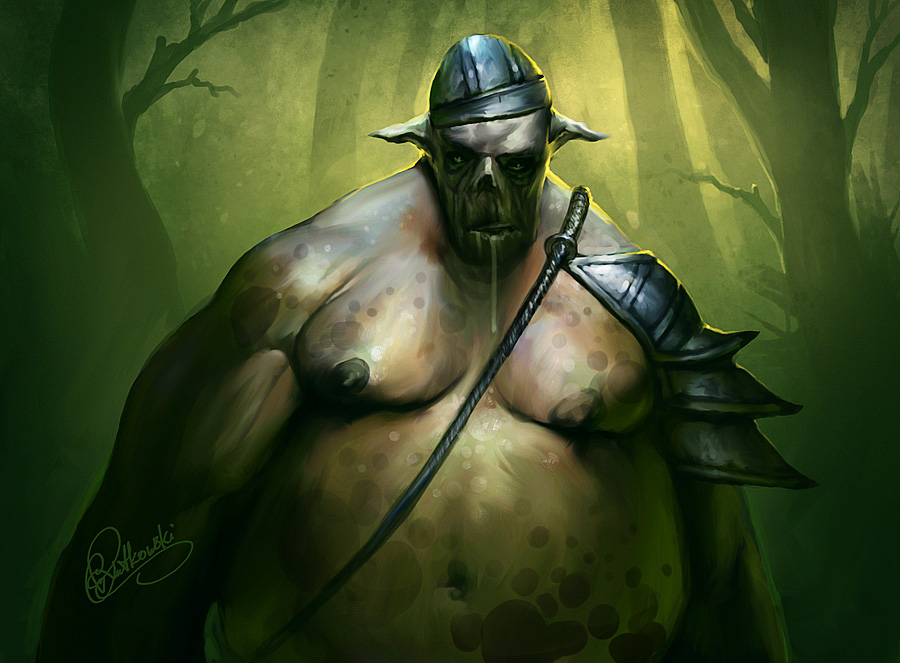 Zyler again applies a little more Healing to the Paladin, who stays down and plays doggo making use of his Lay on Hands; the War Priest also conjures his Spirit Guardians, which really turns the tide. Ken Lee emerges from the barracks and unleashes a Shatter spell, Zalt keeps up a barrage of Eldritch Blasts, while Lord T stays hidden throughout- and is deadly accurate with his bow, until he realises that he only has a dozen-or-so arrows left (he forgot to top up in Womford/Bargewright).

The fungi fuelled menaces’ don’t give up, the guys manage to batter one of the fiends unconscious, the others are eventually taken down; although en route to victory all of the guys (save Ken Lee) wrack up a few wounds.

The guys suck up the hurt (Grimm uses up the most of the rest of his Lay on Hands), and then in a display of wonton recklessness (that the GM loved by the way) the guys start opening doors and investigating the recently vacated chambers- at random and individually.

They did say this was going to be a rush job…

Zalt is the first cause a stir, the Warlock investigates what looks to be the chambers of a Dwarf in authority, a well-kept bedroom with a desk and fireplace etc. Zalt strides to the desk but doesn’t get there- the Rug of Smothering envelopes him, his muffled cries bring Ken Lee running- several Magic MIssiles, much more screaming (the rest of the guys come running) and a Dissonant Whispers spell later and the Warlock is at last out of the Rug; the heavy squad arrive to administer the rest of the beating. 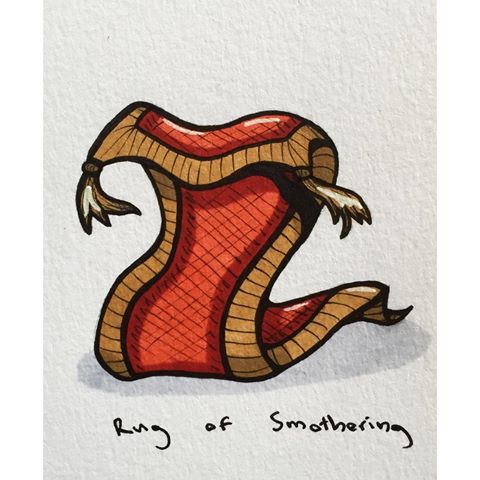 Alas the chamber hides no clues, and only a little treasure.

It gets worse, or else no better.

A warning is issued about random wandering, Zyler (who is on his way to developing a personality) is however having none of it, the Priest of Tempus is in a rush, flinging open door after door. However the Priest is not the cause of the next upset- Lord Thaelond (still actually Goren) is.

The Rogue wanders into the bathhouse, he’s spotted a backpack sprawled there, a moment later and LT is also screaming for help, the four Violet Fungi in the chamber flail wildly and necrotise (a lot) the Thief. The guys come running (again), Lord Thaelond manages to escape the chamber, thereafter the slow moving Fungi are blasted to mulch. Grimm and Zyler adopt a hands-off approach to these critters, they’re not getting close to them. 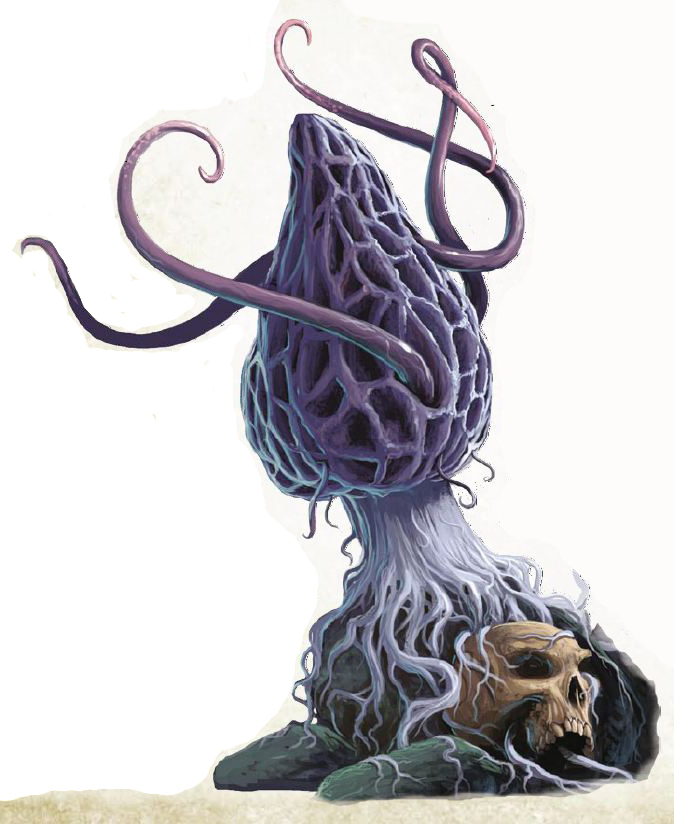 The fight (not much of one) is won.

Zalt issues a warning, there is to be no more of this solo wandering, chastised the guys grab the backpack (containing a little more treasure) and then decide to take a break to interview the fungi-riddled tough Kobold they knocked unconscious earlier.

Alas this does not go well, the creature only speaks Draconic (understood by Zyler only), and even then its words are seemingly plucked from the air at random. It is addled- brain dead, a plant-thing; Zyler kills the creature to end its suffering.

The Union explore (cautiously) more of the chambers in the eastern section of the long passage, discovering in the process that the fungi-filled passage continues to the south. Another chamber is entirely collapsed, with a few dead Kobolds caught in the compass of the ceiling fall; and yet another chamber contains a dead Kobold half-skeleton half-flesh (or scale). Lord T is sent in, the Rogue narrowly avoids a curtain of Green Slime which falls from the ceiling.

The door is shut, the guys retreat- four of the five are wounded still, time for a break and Zyler’s Prayer of Healing. The exploration will have to continue in the next session.

Ongoing Quests- Quest #1 Get the Pitchblende safely & secretly to Red Larch (COMPLETE), then meet up with Strom Halifax- get it authenticated, sell it and then return home- easy job. Quest #2 Explore Dhol Kuldhir- find the ‘door at the end’ (ONGOING). Quest #3 Find Savra, Lady Lara’s Sister- with the Flying Knights. Quest #4 Find Goren (who is Lord Thaelond really)

New Info- The guys are in Dhol Kuldhir, the ancient Bronzehammer ruins- the place is guarded by fungi-riddled Kobolds, and ancient traps and devices. The dungeon is also thick with fungi spores, the Union needs to be quick in their exploration.